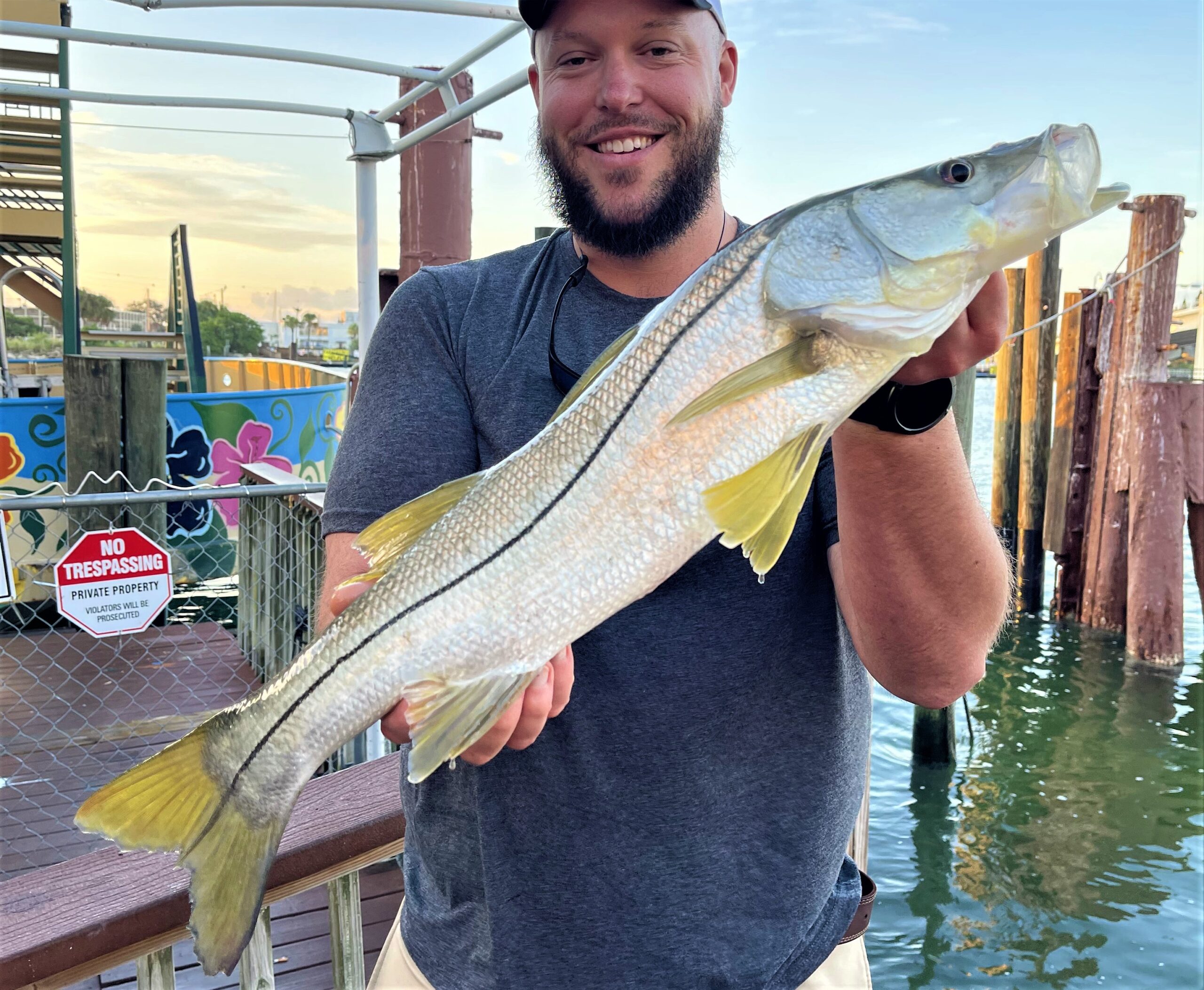 Red tide persists in the area and continues to be most prevalent along the coastline and around the intercostal north of Tampa Bay. We are still seeing plenty of actively feeding fish even in the areas affected by red tide, but they seem to be most actively feeding when that clearer more clean water shows up. Look for that incoming tide which typically brings better water from the offshore area. To keep up with the current forecasts of the red tide blooms, you can monitor it here -> http://ocgweb.marine.usf.edu/tbm/hab/

Mangrove snapper are super thick around the area currently and were nearing that time of year when they start to move out of the bays and the bigger fish will leave the inshore waters for near shore habitat. Mangrove snapper spend nearly their entire juvenile lifecycle in the estuaries, mangroves and ultimately around seawalls, docks, bridges, rock piles and jetties of the bay and intercostal until they reach around 10-14 inches until they move out near shore. Typically, as waters cools this will trigger the push of mangroves along with lunar cycles. Great time to capitalize on the plentiful, aggressive, and hungry mangrove snapper before their numbers thin and they get less prolific than the summertime warmer weather. This morning there were clouds of mangrove snapper around the docks of Johns Pass chasing the plentiful small fry baits that were crowding the dock lines. They made it tricky to get bait down past the snapper to reach the redfish and snook that were hugging the bottom. They love the smaller pieces of shrimp and lighter tackle, but if your patient you can even get them on bigger whole shrimp too even when you don’t want to!

Snook fishing has been good around the area lately, but you really got to time your trips around the tide and try to capitalize on that sunrise or sundown or nighttime action. During the heat of the day, they are much less active and much more leader shy or just plain lazy. We are having the most luck around the area using the soft plastic white paddle tails, imitation shrimp lures, or the early morning or low light conditions the surface lures work well too! However, live shrimp or white bait works too!

Redfish action has been hot around the area and continues to be impressive around the flats, mangroves, oyster bars, beaches, and local passes. We see them most often overnight or early morning or in the late afternoon when waters are cooler, but during the heat of the day you can get lucky on the cut bait or slower moving artificials. Especially if you find areas of shade, cuts, pockets, or holes adjacent to structures holding bait. The plentiful white bait of the area has them feeding well on white bait, but crustaceans are always a redfish favorite, so shrimp or smaller crabs works well.

Trout remain steady through the area on those deeper flats still and they are steadier even during the day. However, the dock lights at night are a great place to find them, but the full moon coming up does disrupt that pattern giving them enough light to still feed actively through the night without congregating around the local dock lights of the area.

Pompano action is picking up around the local passes, on the beaches and around the bridges that feed the passes. We are seeing them most on the pompano jigs, but live shrimp or sandfleas work well as other options for the pompano too.

Triple tail still around the area around local buoys, markers and floating debris around the bay, channels or along the beaches. Great time to go look around while heading to or from the area you plan to fish most of your fishing day. We are seeing these guys caught best in the bay around the markers, but you can find them hiding under virtually any small floating structures.

Right now, were seeing the hogfish bite remain steady, still overall very slow compared to the busier time when waters are chillier. However, we are seeing a few around 30-60ft of water using lighter tackle and live shrimp. The knocker rig, jig head or nekid ball jigz method are still best when targeting these hogfish.

Lane snapper action remains hot near shore right now anywhere from 40-100ft deep throughout the near shore waters. However, they become much more common, larger, and more aggressive as you get further from shore. We find them on squid, cut threadfin or even live shrimp using the hogfish methods work for lanes, but the double snell rig for mangroves is an approach that works well for lane snapper too especially in deeper waters.

Mangrove snapper action has been decent near shore and should pick up as most of the mangroves move from inshore to the near shore waters here in the coming weeks. We see these guys follow nearly exactly the trends and rigs and technique laid out for lane snapper above, however, we don’t normally see them caught on squid. You can get some big mangrove snapper though using smaller pinfish for bait near shore.

Red grouper has closed but we are still catching some scamp grouper from time to time near shore and the big news lately has been the uptick in the black seabass we are seeing near shore. Typically, we catch these guys here and there but the last week we have seen quite a few nice ones caught and we hope to see that trend continue as they are incredibly good eating fish too!

We are seeing plentiful mackerel along the beaches and extending into the near shore waters following big schools of bait. Plus, typically around that full moon late September into early October we see those kingfish start showing up. This should be a great addition to our near shore fishery and were hoping to see them sometime in the coming week or two. Especially if we get a cold front to swoop down to the area, we should see our first kings show up shortly after.

Amberjack are still open until the end of October, but we have seen a decline in the number of jacks we are seeing out there on the water. However, now that red grouper are closed that will give us a shot to go hunt those jacks down even more. Plus, while fishing deeper for jacks we are seeing big porgies, vermillions, yellowtail, scamp, mangroves, almacos, and others too!

Scamp grouper hunt is on right now as we have time to focus on these great eating fish and our Flying HUB 2 private fishing charter yesterday landed 15 keepers for seven anglers with a great start to the hunt. We see these bigger scamp groupers right around 120ft of water or more and the closer you get to around 200ft the bigger they get. We look forward to dialing in on these guys more through the fall until the gag bite picks up heavily for us with cooling waters.

Mangrove snapper action has been steady, and we typically see a good overall size of goozers this time of year as well. Typically, we find the mangroves feeding well on big ledges, peaks, rock piles, or any good structures offshore. They will typically be down towards the bottom but will come up in the water column as we fish a spot, or you can chum them up too. We catch them best using the double snell rig 5-6ot hooks and around 40-50lb test and a chunk of threadfin or sardine. We will brine our baits on long duration trips to preserve the bait and get the outside more tough while the inside gets oilier and funkier for the mangroves. Hooking the bait can get trickier on a double snell rig so we highly recommend checking out the videos on our fishing tips and tricks page where we go over how to tie this rig, how to hook the bait, how to brine the bait and much more! Here’s the link to our fishing tips and tricks page -> https://www.hubbardsmarina.com/fishing-tips/
Yellowtail snapper action has picked up lately too and we hope to stay on these guys. They typically love a small squid strip about 2 inches long and about a ¼ wide with no more than about a ¼ inch in height. We will use this style bait on around a 40lb porgy rig or high low rig and have great success on the yellowtail when they are ready to cooperate. Sometimes catching two at a time. Plus, this is a great set up for plentiful big vermillion snapper and porgies while fishing deeper water too. However, you typically won’t see the scamp or the mangrove snapper bite this type of set up as they are more leader shy and smart. While you can get a chance for everything using the double snell rig on a fish finder rig set up, but you sacrifice the second hook.