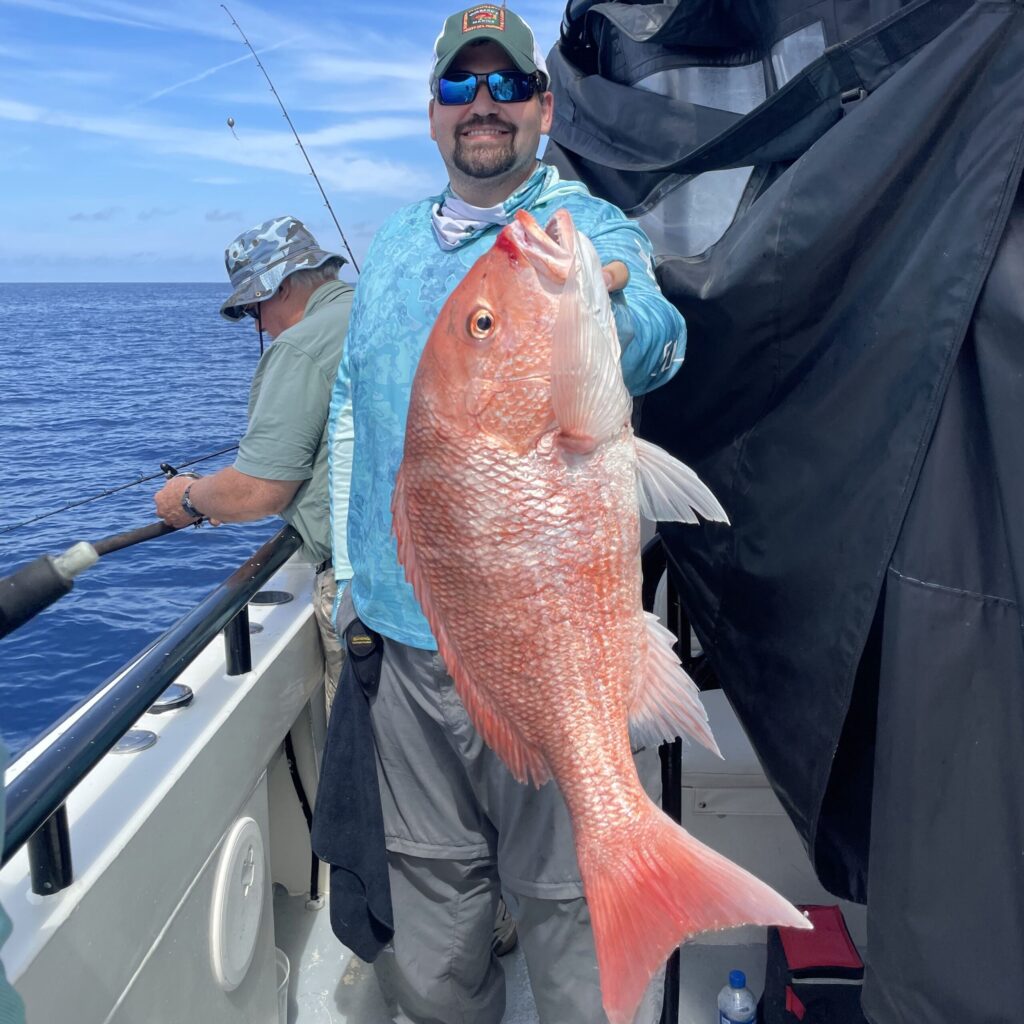 Snook are stacked around the passes right now we are seeing plenty of these guys around the dock lights, bridge lights and in the early morning around structures as the sunrises. During the day, plenty of snook action around the bridges, docks, piers, jetties and grass flats and islands of the bays. Look for them along the beaches moving parallel to the beaches in those swash channels too. This time of year, the passes and beaches are where you can find plentiful snook. There’s still active fish in the bay bust most are slot size and under while the slot size and larger move into the passes and along the beaches. 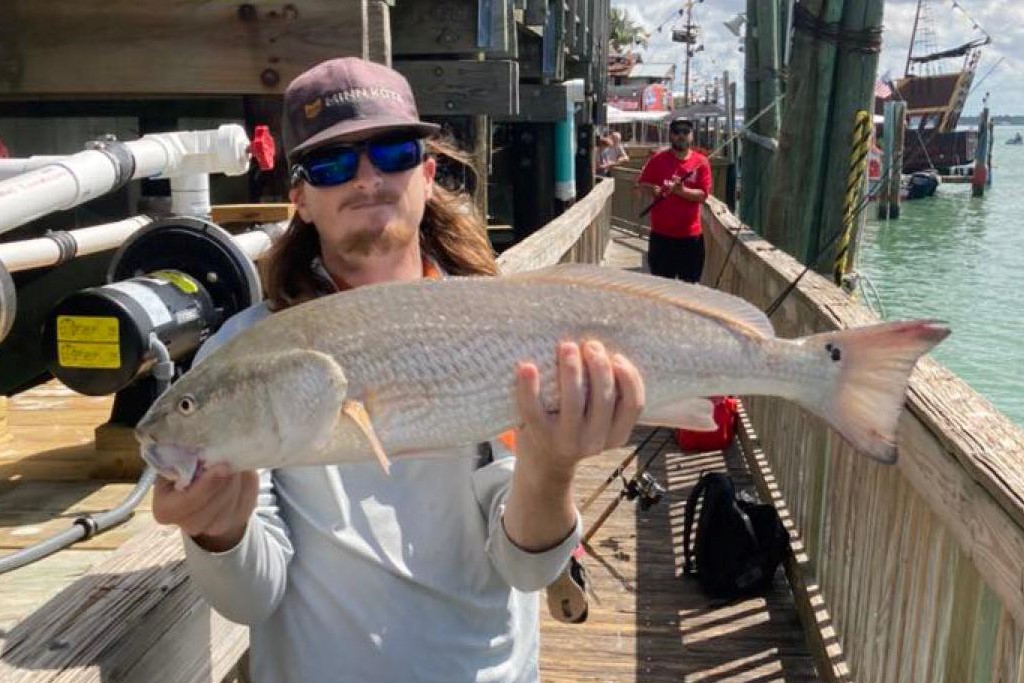 Redfish bite is hot right now around the passes near the docks, bridges, and sandy edges. We are seeing a great redfish bite around the dock during the day especially when you ‘chum’ a bit with some fresh dead shrimp. The bottom is the best place to find them foraging for chunked dead bait or those shrimp or smaller crabs. Plenty of black drum mixed around in these areas foraging on the bottom too. The back bay has plenty of redfish action too around the flats, mangrove shorelines and oyster bars. 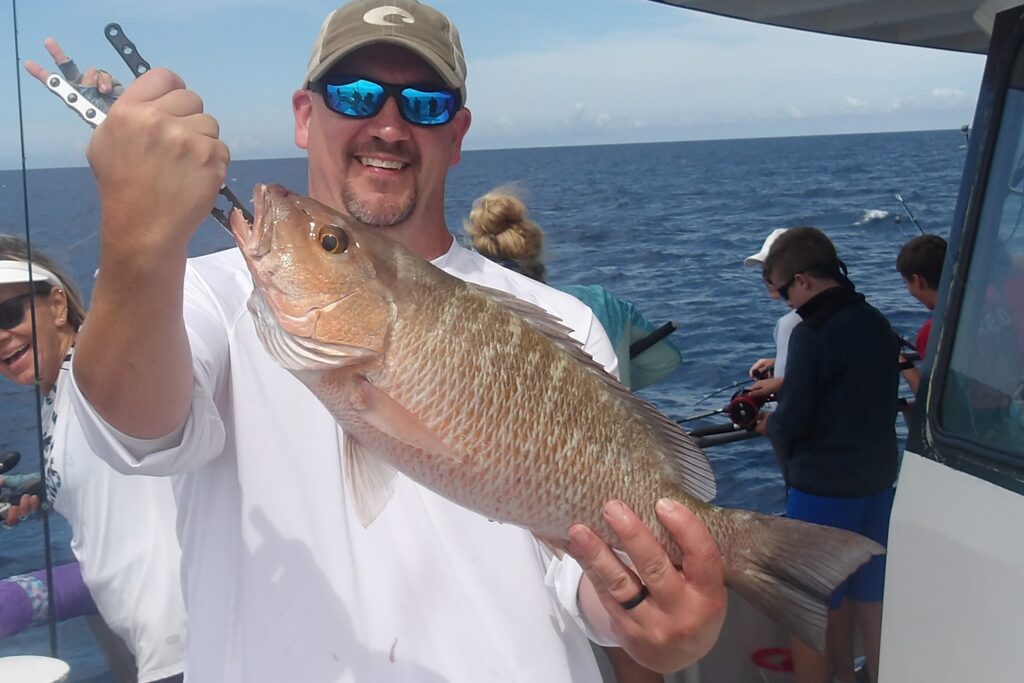 Mangrove snapper are prolific around virtually any structures. We are seeing them around the rock piles, bridges, jetties, docks, seawalls and virtually anything holding growth and attracting bait.

Trout bite is steady at this time around the passes at night on bridge lights and dock lights. During the early morning hours just after sunup look from them around the beaches and flats. During the day look for them on the deeper flats, edges of shallower flats and in those potholes and cuts of the local grass flats too.

Tarpon showing up in droves to your local passes, shallow sand bars, and moving up and down the beaches. There are some great tides through the weekend that should get the tarpon actively feeding. Those large new moon tides should flush some bait, crabs and white bait that should get big schools ready to chew.

Pompano bite still around local passes, around the local bridges and along the beaches. Look for them in that sandy bottom area especially near the structures or channels where they can easily find bait to ambush.

Sheepshead are spread out and picky in the warmer waters, but still, plenty around the area. However, they get much less aggressive as waters warm, and they spread out in quite smaller numbers.

Mackerel still biting in the earlier morning hours along our local passes, jetties, and beach fishing piers. Look for these guys where bait is congregating, and water is moving.

Red snapper bite is FIRED up offshore right now. They are open and in full swing for EVERYONE off the west coast of Florida in the Gulf of Mexico in federal waters. The private recreational anglers from private boats are governed under the FWC private rec season of June 4th until July 28th with the likelihood of a possible longer season with added days in the fall. The federal for hire anglers aboard the charter boats and party boats with federal fishing permits have a little longer season to start with a June first opener that runs until end of day August 2nd, but there is no shot at the feds being able to even if our quota is not filled add more days in the fall. This is the benefit to private rec anglers and their state managed seasons if the council will act on the state data calibration issues that Alabama, Mississippi, and Texas are having.

Luckily, Louisiana and Florida have state systems that closely align with their federal data counterparts. Florida private rec anglers will actually gain access and lengthened seasons if the council takes an equal approach only penalizing the states with currency so off base it requires a more aggressive currency exchange ratio. State management has worked for private rec anglers and all the states have spent a lot of money and time developing their own state data collection systems and they have all been peer reviewed and approved. However, we have five state data ‘currencies’ that are all having to be measured against the federal data ‘currency’ that sets the ABC or acceptable biological catch. This is the main issue; you cannot bring us currency to Europe and use it you must go to an exchange and they use a ratio to turn your USD into Euros it is the same issue hear. Just like the old saying you cannot compare apples to oranges. Well, the federal quota is set in oranges while each state has their own data collection system that measures in apples, pineapples, bananas, pears, and blueberries. So, we have to get all those customized data collection streams to common currency through calibrations to ensure that the quota is not overfished. Well currently its being exceeded by a great deal and the council is struggling to find a data calibration solution.

Back to fishing, these red snapper are biting best in our area beyond around 140-160ft of water. The deeper you go the bigger and more prolific they become. We fished as deep as nearly 300ft of water recently and the red snapper only got bigger and more concentrated as we got into deeper waters. Big dead bait chunks are the hot bite right now for the red snapper like the bonita, mullet, mackerel or virtually any large oily fish are great options to fillet and then strip out to make great red snapper baits. Also, large squid strips or octopus tentacles are great options too. We are seeing big red snapper on whole threadfins and even double threadfins as well. These guys are super aggressive, and we do not normally have the break off issue so typically 60-80lb leader is sufficient when targeting the American red snapper offshore. 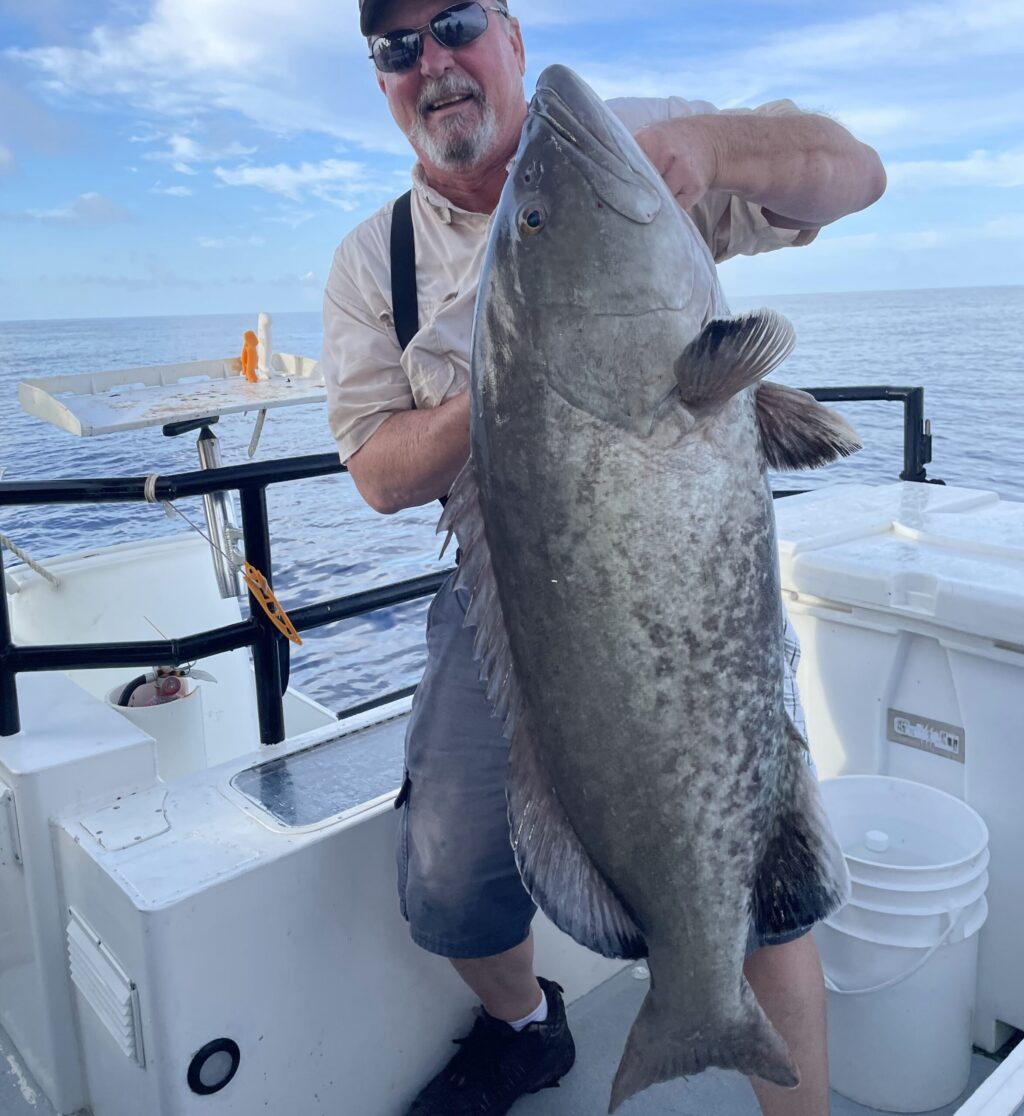 Gag grouper are biting extremely well right now too for us out in deeper waters. We are seeing a few here and there near shore and actually more inshore around Tampa bay. However, the bulk of the fish and especially the truly large gag grouper are well offshore due to the warmer water temps. When waters are hot gags are in deeper cooler waters. When the water cools down and gets colder they come in shallower. Right now, the best areas to start looking for gag grouper is out there around 140ft of water or more where we are targeting the red snapper. Also, the gags are super aggressive as of late loving the biggest live baits. We are seeing them fired up on the monster squirrel fish or big white grunts and even porgies too. The bigger and friskier the live bait the more likely a bit ole gag will eat it up while offshore fishing with heavy tackle and big patience! The trick to gag grouper fishing is having an exceptionally large reel with minimal 45lbs of drag ore more and at least 80-100lb test and a very large live bait requiring an 8-10ot hook or more. Really that 2-3lb bait and that 12-14ot hook and 125lb leader and that big 9ot equivalent reel is what will get you that trophy gag grouper. 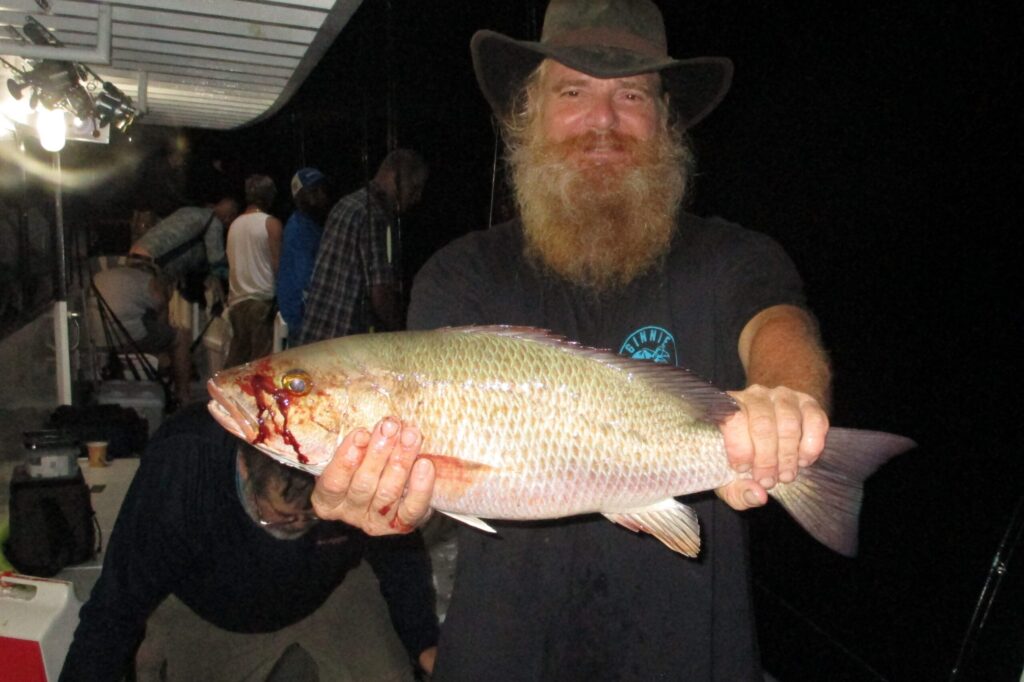 Mangrove snapper fishing is going well for us right now too we are seeing active mangrove snapper around 70-100ft of water nearshore and virtually all over the offshore waters. Great time to target mangroves if you can get past the red snapper or stay inside of them in shallower waters under 110-120ft of water. However, while out deep targeting them at night and avoiding those high-water column ‘Christmas tree’ shows of red snapper is a great way to get on a good bite of mangrove snapper. We are catching them most often on that threadfin chunk with around 60lb leader out deep and 40lb leader in closer. However, fishing beyond 100ft of water you do not want to lighten up your leader more than around 60lb, so you have that shot at a gag if he happens to take your smaller chunked threadfin while the gags are open. 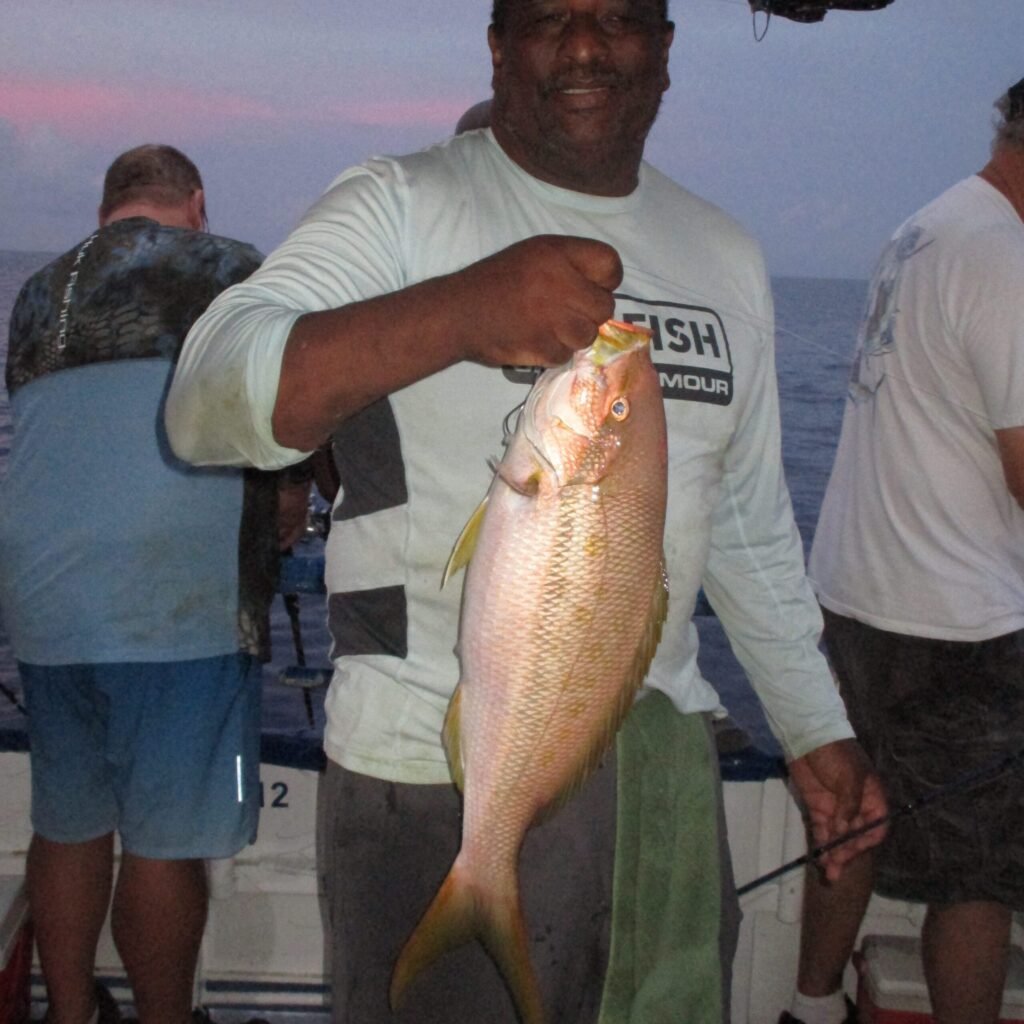 Yellowtail snapper are biting well for us right now too especially while fishing out deeper for these bigger American red snapper. Around 120-160ft of water and beyond the yellow tail start to get prolific and like the red snapper, the deeper we got the likelihood of bigger yellowtails become more and more common. 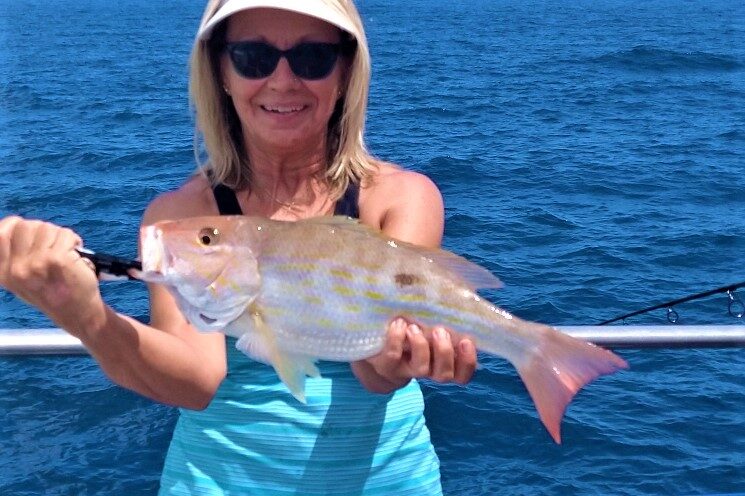 Lane snapper in closer in the near shore waters are super-hot right now with some bigger more consistent fish around 80-100ft of water but were seeing them as deep as 120ft of water in good numbers and as shallow as 60ft in decent numbers too. 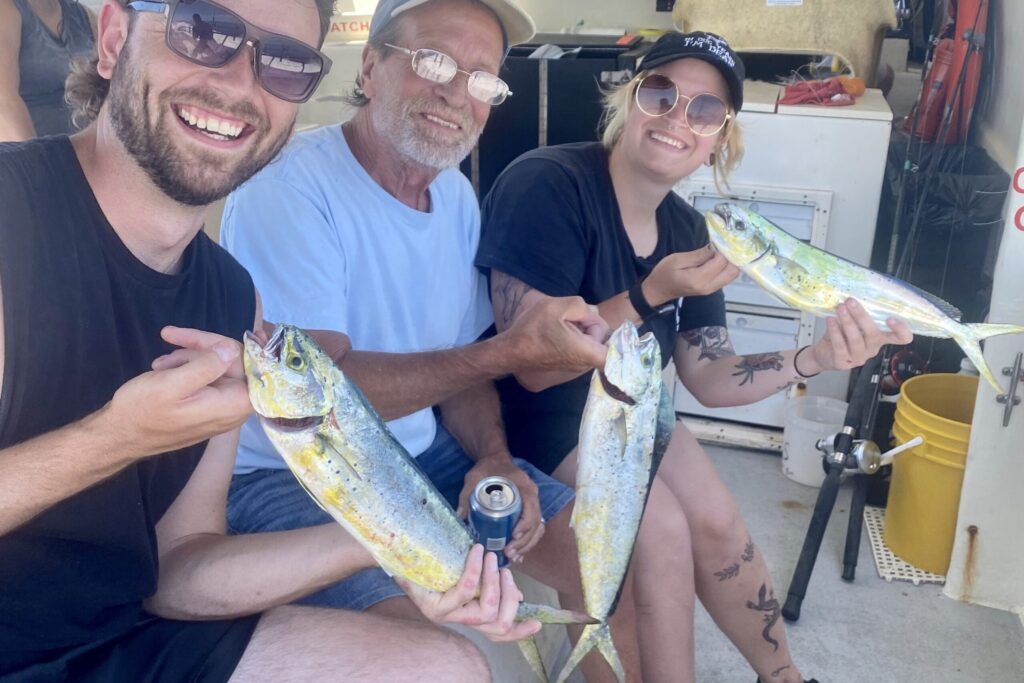 Pelagic action is super crazy right now. The opportunity for passing chicken dolphin schools is ever present. Plus, we are seeing sailfish out there fairly often plus plentiful kingfish and blackfin tuna. Wahoo are also around this time of year as well. It is imperative you remember your flat line and do not forget to set it and watch for it while tearing up the red snapper and gags this summer especially when fishing beyond 120ft of water. Those mahi mahi will also swim nearshore too with some decent schools spotted as shallow as around 35-40ft of water.