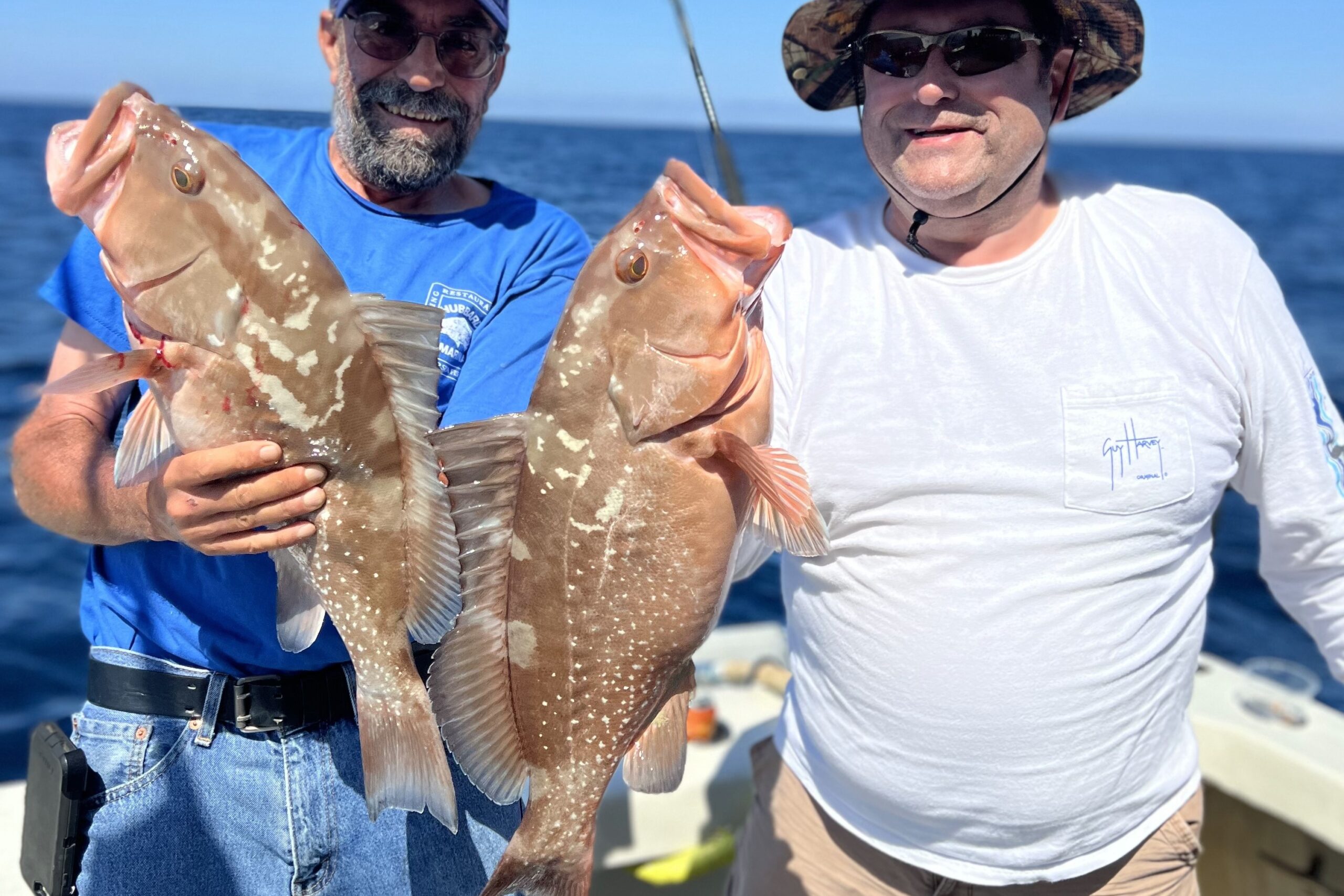 Water clarity is absolutely nuts right now! We are virtually seeing the bottom when fishing on our five hour half day fishing trips on the party boats and while fishing closer to shore on our fleet of private fishing charter vessels here at Hubbard’s Marina. It’s crazy to be fishing in 30-40ft of water and near be able to make out the ledge or the rock piles we are fishing. However, that does lead to the fish being a little more leader shy and slow to chew especially if you aren’t using that lighter leader.

This past Thursday the ten hour all day crushed the lanes its been really good lane snapper fishing on our near shore trips from the ten hour to the private fishing charters about the HUB and Flying HUB 2. We are seeing the lanes most heavily from around sixty foot of water out to around one hundred feet so the five hour half day fishing trip isn’t quite getting far enough out to see the lane snapper. However, they are getting good numbers of the white grunts or what we call grey snapper, porgies and a few black seabass and hogfish on the half day fishing trips on the party boat. This past Tuesday 10 hour also did well on the lanes too, it’s been pretty steady when we are able to get out there to them in the deeper near shore water.

Red grouper action remains steady near shore as long as your past around seventy foot of water. We are seeing them on the live pinfish and also big threadfins with the tail cut. However, the red grouper slayer is the threadfin with a strip of squid hooked in one side after the threadfin is hooked through the eye. Doubling up a piece of squid with the threadfin will cause it to spin on the way to bottom so you have to drop it much more slowly. However, it seems to be really working well to entice those red grouper into chewing near shore.

Mackerel are still around near shore heavily in shallower around forty foot of water or less. We are seeing big areas of bait showering up on the surface while mackerel try and eat as much as they can. We are catching them pretty easily when trolling spoons behind planners. Definitely around 15-18 foot of around 40-60lb mono works well behind a number one or two planner and about a 4-6 inch spoon.

We are seeing some solid red grouper offshore after that full moon effect wore off we did much better the second half of this past week on the bottom fishing for red grouper. However, it remains a grind only catching one or two here, and then moving to catch one or two more and just continuing that pattern through the trips.

The big mangroves continue to be steady offshore too. We are seeing solid mangrove action, hand full of yellowtail snapper, big vermillions and some nice porgies too! Great time to get out and take advantage of the lighter loads and plentiful grouper and snapper before the chaos and heat of the summer kicks up!

REMEMBER, when fishing deeper near shore of especially offshore the Descend Act is in effect so when in federal waters you must have a descending device or venting tool ‘rigged and ready’ so be prepared with that venting tool if you know exactly where to vent the fish, but if you don’t here’s some helpful tips – https://bit.ly/3L5HTnv Plus, keep in mind using a descending device is super easy and doesn’t take much practice or as much precision as venting does, and right now you can get over $100 in FREE DESCENDING DEVICE GEAR by visiting this link and taking a short course on barotrauma mitigation techniques that will help more fish survive! The course is only about 10-15 minutes, and it will really help you preserve, protect and proliferate our offshore fishery so spread the word -> https://returnemright.org/

NEAR SHORE – From the beaches out to twenty miles, or up to 100ft of water

OFFSHORE – from twenty miles or 100ft and beyond

For more fishing reports, photos, videos and more check out Hubbard’s Marina on Facebook, Instagram, YouTube, Tik Tok, Twitter, Pinterest or Snap Chat just simply search @HubbardsMarina and do not forget our family motto, “If You’re too busy to go fishing, You’re just too busy!” Thanks for reading and checking out our report – Capt Dylan Hubbard, Hubbard’s Marina – Call or Txt me anytime at (727)393-1947 | https://HubbardsMarina.com

“Tails From The Darkside” TV Shoot with T.A. Mahoney Co.
Comments are closed.