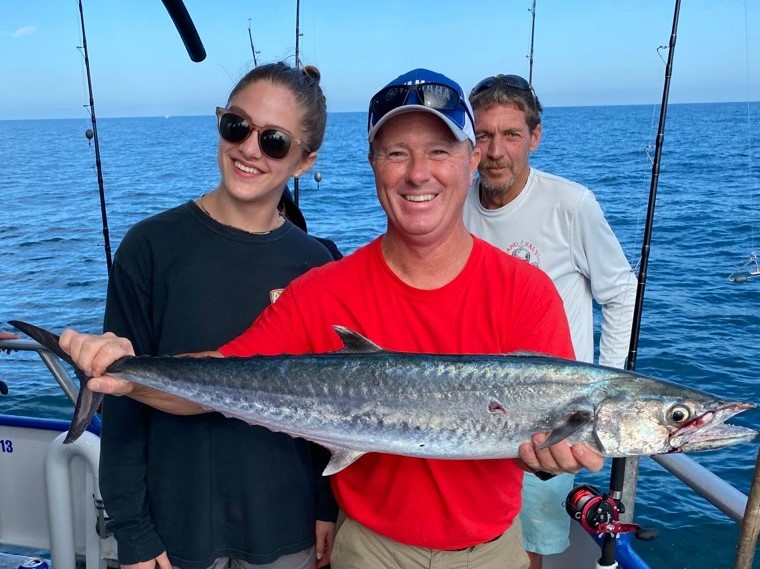 We have a last quarter moon this weekend and a new moon coming up next weekend. Tides will start to get more frequent, and we will have better moving water as this coming week progresses. We have a high pressure just cooking our area through the weekend into middle of next week when we have the tail edge of a cold front squeeze down into the area. However, currently that front’s forecasted impact to the area is minimal other than finally relieving us of this high pressure and strong east wind that comes with that high pressure. Due to this, we will continue to have that more easterly flow through the middle of the week with some strong to moderate winds, giving way to a milder second half of the week with some stronger tidal flows and that moon phase typically pushing fish to feed more during the day. Fishing looks best the second half of this coming week and into next weekend, but if your able to hide from the wind the fish have been biting through the high pressure.

Snook action has been good throughout the area this past week again. We are seeing plentiful amounts of fish moving around the flats, mangrove and sandy shorelines, oyster bars and passes. Plus, the beaches have had a decent number of fish show up and stay around too. We are seeing them biting well on shrimp at night in the passes as the shrimp flush on strong outbound tides through dock lights and bridge lights using lighter tackle. However, using the live white bait, grunts or pinfish are good options throughout the daytime and while fishing structure with heavier tackle at night. Also, the mirror lure MirroDine is still one of my favorites most anytime along with the soft plastics when fishing shallower areas like grass flats. Great time to find snook feeding around those major and minor solunar feeding times. Make sure to check the tide forecast for the area you are fishing and often they will give you the solunar major and minor times. I like using the ‘smart fishing tides’ from salt strong to check the best times for actively feeding fish – https://bit.ly/38f2Xtd

Trout action has been steady through the area once again as well. We are seeing most of them feeding still towards those deeper flats. We are seeing them on the edges and cuts of shallower flats too. Think of where the tide is moving and where the fish can stage to ambush bait being pushed over the flat by the current. This is often where not only the trout will be but other feeding predatory fish too. Wind will also tend to stack up the bait and thus the trout too, but especially areas that are wind protected. If you can find an area where current is rushing water and bait to a shoreline that’s more wind protected, you will find plentiful eating fish along that shoreline.

Redfish action is going well on the flats right now, but it takes you finding the areas they are prone to feed in and a little leg work cruising the flats. Once you find the areas then they become much easier to target while you move throughout other areas. They are starting to like that cut dead bait especially in high tide situations where they can get tucked back in under the mangroves on a shoreline. Casting chunks of dead ladyfish, cut threadfin or pinfish up under the mangroves or as close as you can is a great way to target the redfish.

Black drum are biting around local bridges, docks, jetties and even on the beaches. You can sometimes run into them around the local flats, but we often see them caught most around the bridges and docks. Local bridges working a lure on the bottom for things like pompano or snook can sometimes find them by accident. However, to target them cut crabs on the bottom is the best option but even shrimp at the bottom works well too.

Sheepshead action is still very much excited around local piers, docks, bridges, jetties, and seawalls. They have started to thin, but you can still find good concentrations. We are seeing them love the cut clams, oysters, barnacles, and shrimp on the lighter tackle. However, right now I would be using more of the small pieces of shrimp because those same sheepshead areas are now giving way to more and more of the hungry mangrove snapper that are getting ready to head near shore.

Mangrove snapper action around the inshore waters is starting to heat up as the water warms up more and more. These guys get excited and very aggressive and prolific as the summer approaches. The eight-to-twelve-inch fish are starting to leave the mangroves of the back bays and make their way to the passes and bridges to get bigger and fattened up for their move near shore and ultimately offshore through their life cycles. They start as plankton offshore and move into estuaries like Tampa Bay to grow in the mangroves then once around this eight-to-twelve-inch size they start to move near shore to be adult spawning stock.

Pompano action is hot on the beaches right now and around local passes, channels and cuts. Plus, some sandy edges of the grass flats are holding pompano too. We are seeing these guys feeding best in the earlier morning on the beaches, but you can catch them all day as well. They will often bounce between passes and when you catch one often there will be a few more around if you can get them eating before the tide changes or the school moves along. Using the pompano jigs is the best way to target them working the swash channels along the beaches and around the jetties. However, local beach fishing piers often are good areas too. Plus, you can use the live shrimp on the bottom too!

Mackerel are thick throughout the bay and especially around the passes, piers and jetties of the area. You can also find them on the deeper flats of the area too. They are easily found in higher concentrations along the beaches, bays, and bridges when they get bait all schooled together and up at the surface as the birds will often give away the location of the fish. Use those fast-moving flashy baits and you will find plentiful mackerel action!

Shark action has been heating up but seemingly is hitting its stride throughout the bay and along the beaches. Great time to get out anywhere that’s deep water adjacent or where water is moving to anchor up or fish from a jetty or pier and chum a bit to bring in endless shark action. Using that cut dead bait on the flats for redfish will sometimes net you a shark by accident too. They are really prolific throughout our bays and will only get more and more active throughout the summer as we see more juveniles being born and more big females in the bay

The deeper near shore waters are really producing the red grouper well for us on our ten hour all days where we are fishing right around that 80-100ft area using live pinfish, whole threadfins with cut tails, and strips of squid to target those red grouper successfully. Around 40-60lb leaders and around 5-6ot hooks depending on your bait size is a great near shore set up for targeting the red grouper.

We are also seeing a solid lane snapper bite out there once past around 60-70ft up to the deepest near shore waters using the shrimp or cut squid is a great way to target these great eating plentiful fish.

Mangrove snapper action seems very strong right now near shore once closer to that hundred-foot mark but even as shallow as 50-60ft we are seeing some increased snapper action. However, the deeper you get the more prolific and concentrated and larger they become. Using 30-40lb leader and 4ot hooks is a good idea when targeting the near shore mangrove snapper. Especially a double snell rig with a chunk of threadfin is an optimal option in my opinion.

Hogfish action has definitely slowed now that water is warmer, and we are starting to focus more on the deeper water for those red grouper. However, they are still biting, and we are still catching a handful of them here and there. They are just more leader shy and more spread out while the water warms. We are still using lighter leader, smaller hook and light lead with some live shrimp is the best way to target the hogfish around 40-90ft of water.

Mackerel are super thick near shore right now from the beaches out to around 80ft of water. We are seeing them mostly around 30-60ft range using trolling spoons behind number one or two planners. Typically, around 15-18ft of 40-60lb leader between the back of the planner to the spoon is a great idea with a snap swivel on the front and back of the planner to prevent any spin getting into your main line. Remember, to stagger your trollers to prevent any lines coming together and getting tangled. We are seeing the best action trolling around six to nine knots.

Kingfish action has been solid near shore too. We haven’t seen the super thick concentrated kingfish, but we are catching quite a few while trolling, flat line fishing and occasionally just dropping or retrieving baits while bottom fishing. They are more random compared to the more prolific mackerel. Definitely keep that flat line out there while bottom fishing near shore because you never know what will be swimming past the boat

Unfortunately, we had to cancel our mid-week 39-hour long range overnight fishing trip due to the weather, but we did get offshore this past weekend for that 44-hour full moon overnight trip. Our 12-hour extreme aboard the flying HUB 2 hasn’t been able to get offshore much at all due to weather either. This strong east wind from the high pressure makes it exponentially rougher the further you travel from shore which makes it very tricky to find a break to make it offshore.

However, on that 44 hour we saw the fish were still waiting for us out deep past the 140ft mark with fat red grouper, a few scamp, plentiful mangroves, big vermillions, porgies, a few almacos, a few yellowtail, kingfish, tuna and that chance for a wahoo is still present too!

This time of year too we run into a lot of those hungry and aggressive gag grouper which we have to quickly de hook and vent and/or descend to make sure they are healthy and able to return to bottom for us to be able to go get them again once they open this June. The gags are extra aggressive this time of year due to their spawn especially the ones out deep, so be prepared with that venting tool if you know exactly where to vent the fish, but if you don’t here’s some helpful tips – https://bit.ly/3L5HTnv Plus, keep in mind using a descending device is super easy and doesn’t take much practice or as much precision as venting does, and right now you can get over $100 in FREE DESCENDING DEVICE GEAR by visiting this link and pre registering. They will be opening up the return em right course for private recreational anglers shortly and the plan is to make sure that gear is in your hands by the start of the summertime fishing season! Check out this link to pre register the course is only about 10-15 minutes and it will really help you preserve, protect and proliferate our offshore fishery so spread the word -> https://returnemright.org/