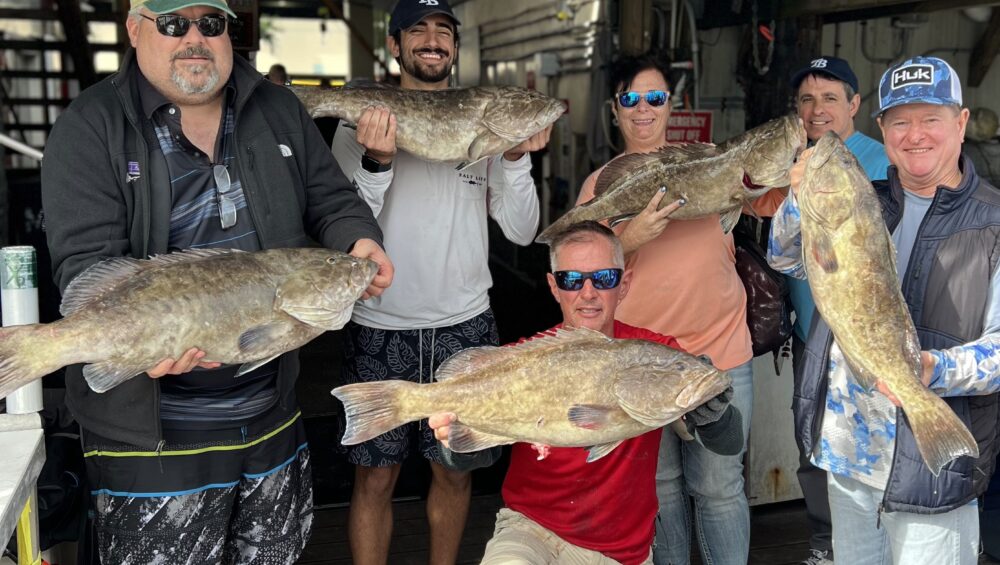 The sheepshead remain the dominant inshore report species currently. This is typical through this time of year when cold fronts dominate the weather patterns. When the cold fronts roll through the weather gets a little temperamental and we see rougher seas, higher winds, and the water gets stirred up and cools off, which the sheepshead seem to like. We find the sheepshead around docks, piers, bridges, jetties and anywhere that’s going to allow the barnacles and clams to grow. Sheepshead love those smaller pieces of shrimp, cut oysters, cut clams and even fiddler crabs. We see the sheepshead mostly biting on minimal weight and lighter tackle like 15 to 20 pound fluorocarbon and minimal weight like split shots. Sheepshead have been biting well but they’ve been somewhat spread out however, they are finally starting to really get concentrated and can be found in much higher numbers in smaller areas. They are finally starting to act like they’re getting ready to spawn.

We’re also seeing some pretty good action on trout right now especially in shallower grass flat areas. We typically find the trout around potholes, cuts and little edges of the flats, and anything like a pothole or a grass flat is considered structure and that’s what the trout are really staged up in this time of year. Look for areas strategically that have been blocked from the wind. Overnight wind temperatures are more cool and those wind protected shorelines in the early morning to midday area are more warm than other areas that got direct wind all night long while it was cooler. Also, areas that have direct sunlight through the morning are going to warm up a lot quicker than other areas. This time of year, you have to think like a frozen fish and think of areas that might be a degree or two warmer, that will often hold more actively feeding fish. Trout love slow moving soft plastics live shrimp and white bait this time of year. However, whitebait gets harder and harder to find as it gets deeper and deeper with cooling water so typically live shrimp is a good option or soft plastic lures.

Redfish action has been going well around the area too. We are seeing red fish around residential dock lines, residential canals, and mangrove shorelines and other shorelines. The very large more of the over slot red fish typically this time of year are found trailing the schools of mullet that flush behind these big cold fronts and they typically are keyed into big chunks of cut thread-fin, mullet, ladyfish or pin fish soaking on the bottom.

Snook action has been mostly in the upper Bay and Back Bay waters. We’re seeing most of the snook hanging out at the mouth of bayous, creeks, rivers, and other areas where those snook can tuck back and stay a little bit warmer. Cooling trends definitely get the snook more accustomed to finding those warmer water areas looking for any reprieve from the cold. Snook are subtropical fish and they like warm water when it cools off. They get super lethargic and slow moving and less aggressive. However, when they can find areas of a little bit warmer water, they will often get more aggressive and feed more. So, as we discussed in the trout section look for those areas with a little bit warmer water and you’ll find more aggressively feeding and more active snook.

The black drum have been active around the upper bay, mid bay, and even outer bay areas along the beaches. Black drum love big structures like bridges and large dock complexes. They like large live shrimp, cut crabs and other big crustaceans hanging on the bottom for the most part. The black drum will take a variety of different baits but to get the big bruisers around the bridges, cut in half large crabs or medium crabs whole are a good option. Black drum are always on or just above the bottom.

On the beaches we’ve got a lot of Whiting and silver trout this time of year there’s still a chance for some Pompano, but they get a lot trickier when this water gets so murky behind cold fronts. It’s tough to find actively feeding Pompano that are consistent in any fashion. But the Whiting and silver trout are much easier to find and much more consistent just past the surf on virtually any beach of the area.

Hogfish action has been going well around the near shore waters. We’re finding those hogfish active from around 30 to about 70 foot of water chasing after that light tackle and live shrimp. Hogfish love live shrimp, but they will also take fiddler crabs, sand fleas, and even rock shrimp. We catch the hogfish mostly on our 10 hour all days, but we are finding a few on our five-hour half days and especially the private fishing charters aboard the hub and flying hub two when fishing near shore. Hogfish are more leader shy, less aggressive species that typically are the last to bite when targeting an area. They love small ledges, low relief and large areas of Hard Rock bottom that will foster crustaceans being present.

Lane snapper also reopened January 1st and we catch a lot of lane snapper while fishing nearshore on our five-hour half days, 10 hour all days, private charters and even to the shallowest near shore to deepest nearshore waters the lane snapper typically are biting really well on a variety of different baits. Lane snapper are super aggressive and typically can be found in pretty decent concentrations as well. And they span a bunch of different variety of bottom types from ledges to rock piles to potholes and everything in between. Lane snapper have become larger, more prolific, more aggressive and a larger overall size throughout our entire near shore and even shallower offshore waters. Just a few years ago you would struggle to catch lane snapper in 30 to 70 foot of water and you wouldn’t find too many of them. However, now it seems like lane snapper can be found at almost any depth and their average size has grown exponentially.

Pelagic wise near shore we haven’t been seeing too much but randomly we’ve seen a lot of small mackerel. This is very odd for the time of year and the water temperature, but we’ve been seeing a lot of small mackerel around on the half day bottom fishing 30 to 50 foot of water. We’re not even trolling this time of year because typically we don’t find mackerel this time of year in that depth range, but we’ve had quite a few half day fishing trips where we’ve run into extremely high numbers of smaller Spanish mackerel.

Gag grouper has been the focused offshore but now with gags closing we’ve shifted focus to fat red grouper scamp grouper big mangroves yellowtails and many many more species. Red grouper are thick out in offshore waters we’re targeting them in deeper water to also find big scant. Typically, this time of year we’re fishing anywhere from 160 to 200 foot targeting potholes and ledges looking for fat red grouper scamp and big mangroves. We’re also finding lots of yellowtail snapper big Vermilion porgies all macOS and many others. It’s a great time to get out there and capitalize on these little weather windows where those fish are fighting really really well. Coming up Monday looks like one of those days to make a long offshore run with beautiful weather low seas low wind and should be a stellar bite ahead of another front on the backside of a full moon.